History and context of the hospital

http://www.asl-rme.it/index.php?p=servizi&&os=223
A forerunner of the hospital supposedly existed since 727, when the Saxon king built a shelter for the pilgrims in the city, but it wasn't until the late twelfth century when it became a real hospital.3 Hospitals in these times were generally built out of charity. There was a evangelical revival going on and pope Innocent III was active reasserting papal power. These establishments were usually religious places and subject to church law. They were often located close to water banks, as was the Santo Spirito hospital, to provide for water and to dump waste.4
In 1198 he issued a breve to protect the hospital Order of the Holy Spirit and saw to it that a Holy Spirit hospital was built in Montpellier, France. In a later breve of that year, two dwellings of the French hospital in Rome are mentioned. Innocent his intention was to institutionalize charitable works, which might have been the motivation behind the founding of this hospital. The exact founding date must lie somewhere between the 25th of november 1198 and november 1201. The hospital was bound to the papacy permanently.5 The hospital didn't only take care of pilgrims, but also of women in labor, the sick, orphaned and abandoned children. One interesting thing about this hospital was that it was one of the first places to have a 'foundling wheel', which is a baby hatch where parents could leave their unwanted babies while staying anonymous. This had to put an end to parents killing or dumping their babies.6 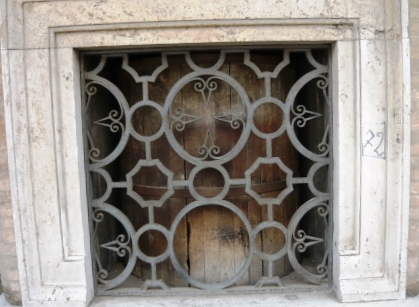 http://ciaotutti.nl/tag/ospedale-santo-spirito/
Pope Sixtus IV (1414-1484) became pope in 1471 and commenced the reconstruction of the hospital shortly thereafter.7 It was completed in 1478. Baccio Pontelli was commissioned by the pontiff to organize the renovation. Sixtus had worked together with him on many earlier occasions and so became known as the first Renaissance pope. One of the major changes was the Corsa Sistina, a 120 meter long wing of the building that extends into the Borgo Santo Spirito. It's renaissance design is still visible today. 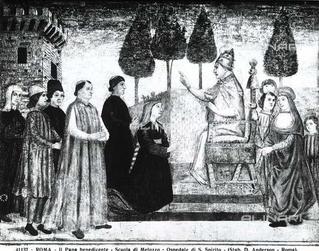 This is one of the many beautiful fresco's in the Santo Spirito. It is located in the Corsia Sistina. It depicts Pope Sixtus IV blessing Charlotte of Cyprus.8