One of the most important squares in Rome, created by the artist Michelangelo Buonarroti in 1546.

The Capitoline Hill (Campidoglio in italian, pronounced “campidoio”) was the sacred hill of the Ancient Rome, where was located the great temple of Jupiter. From the Campidoglio started all the ancient Roman Empire’s roads and the Capitoline Hill was the end of the road for all the victorious armies which came to Rome in the so-called “triumph”.

Throughout the Middle Ages, with the pagans’ temples ruined, the hill became the core for the municipal government, especially after the construction of the Palazzo Senatorio during the XII th century, which hold the city council until nowadays. The Campidoglio became the symbol of an autonomous and independent power separated from that of the Popes, lords of the city at that time. And throughout the centuries there were several conflicts between them. 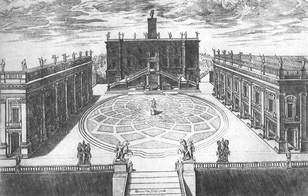 After the time of the Ancient Rome, the Capitoline Hill was almost left apart, and it became a place of pasture for goats. During the visit of the Emperor Charles V to Rome, he and his retinue passed by the square due to its unsightly.  This dishonorable act caused that Pope Paul III ordered the artist and architect Michelangelo Buonarroti the restoration of the Capitoline Hill, in order to make it worth to the city.
Michelangelo reformed the square completely, constructing it all the way round as it was previously, orientating the Campidoglio towards the St. Peter’s Basilica, instead of towards the roman forum.  After Michelangelo’s death in 1564, the restoration continued resulting in a magnificent square with three palaces around it: Palazzo Senatorio, Palazzo Nuovo and the Conservative’s Palace.

The facades of the palaces didn’t respect the original project, but it achieved to have a look of architectural unity thanks to the colossal pilasters, which have the appearance of movement, and to the balustrades, adorned with beautiful statues on them. 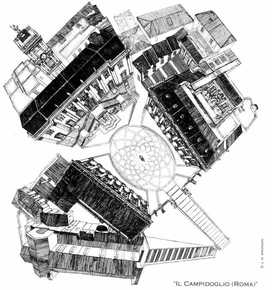 Right in the middle of the square was situated a big equestrian statue of bronze of the roman emperor Marcus Aurelius, which was miraculously saved of the zeal of the Christians against the pagan roman statues by being mistaken for a statue of the first Christian emperor Constantine the Great. 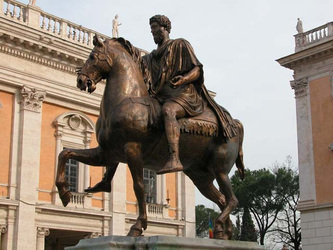 In order to make the square a vital part of the city, Michelangelo constructed a great staircase which connected the Campidoglio with the Piazza d’Aracoeli . The Concordata Capitolina, as it was called, was a good access both for men and knights. At the top of it there were the statues of the pagan divinities Castor and Pollux, there were also a statue of the Middle Age roman politician Cola di Rienzo, just in the middle of the Concordata, and two statues of lions right in the beginning. 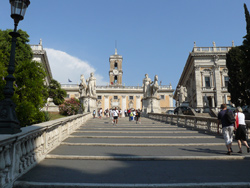